It started last Sunday at a Halloween Pet Parade, there were the usual dogs, a few cats, even a bunny. But what took the cake were two little girls that hand made costumes for their guinea pigs. We chatted a bit, while Sweets layed on a dog bed (not noticing the pigs just yet).
"Is this their first public appearance?"
"Yep!"
Meanwhile, there are pit bulls and golden retrievers walking all around, while these two little critters get a "grass" break (thank you, thank you, thank you, the pigs left the event in one piece). I watched as their parents hung out with them. And I really got that must be what parenting is all about, it's going to the halloween pet parade with your daughters who dressed up their guinea pigs. It's just that simple, it's what you do when your a parent. They were such sweet kids too.

Bruce the 100 lb dane is with the family for a few weeks, we'll be working on his manners and seeing if the horses next door figure out that is isn't a pony. With the business, and the house and the million other things that I could boringly account for, I got a great reminder, again, of those important things....

A client's dog was diagnosed with stomach cancer, last week it was kidney failure with another...it's a new cycle for me, actually a first. To know these dogs, in some cases for years and hear such devestating news. I suppose it happens everywhere all the time, and when it shows up in your world, it gets our attention for a few minutes at least. It's been a year of a lot of firsts- first friends heading toward divorce, first friend who's parent died suddenly, first old friend that died before her time. With all the firsts, there have been lots of hurried moments, wasted time and worries.

So as I sit here with a puppy chewing a rawhide in my lap, a pointer girl sniffing my nose and a dane named Bruce napping on the couch, it's quite the scene. And it's what I do, type and check my email while the dogs nap peacefully. And I'm constantly reminded of the gift they are now and how again, a face lick, a cold nose, a napping buddy. It's what's important to me.
Posted by Op Barks No comments: Links to this post

This was probably ranks up there as one of the "best days ever" for Sweets and Tater. Start with the 9 am fun run in the woods, nothing unusual until...I saw turkeys/buzzards/geese in the distance and reminded myself for the upteenth time that I must microchip my dog (as I'm watching her bound into the woods, out of sight and earshot). Thankfully, Tater will happily hang near me wherever Sweets takes us. After 20 minutes of intense, eyes glazed over, tongue hanging out running, Sweets "waited" for me, lapped up a cold drink from the stream and then was escorted back to the house with my makeshift leash (my long sleeve shirt).

I was reminded today (gut check) that I will start writing something soon. As a kid I was published and wrote for our local paper (real important stuff like "should Michael Jordan be paid more than the President?") So, this is for Mike Smith my Creative Writing teacher and mentor, wherever he is.

Then back to the house to gather the pups for a run at the lake. We said hi to the Great Blue Heron we disturbed, ate some mudd, took a a dip in the water while mom checked the dogs for their first ticks of the season. Back to the house for dinner- raw chicken & turkey medallions (obligatory nail trim here) and then a raw hambone.

Life is good, all is well. Hug your dogs,
Luv,
Sweets & Tater
Posted by Op Barks No comments: Links to this post

floors get four paws up

I couldn't resist posting this picture of Vanna showing off the Rubber Roofing that I purchased online. I hoped that my 400 lb prackage would arrive via freight as proimsed (the salesman was way too quick to get off the phone). It did indeed arrive and last night Scott and I wrestled with 200 lbs of rubber roofing/flooring. Imagine trying to glue and smooth a bed sheet to your floor, and the sheet is 200 lbs. Oh yeah. So after being a little light headed and crazed, the floor was officially tested this morning by yours truly...Sweets and Tater. They played like the nuts they are and gave it four paws up. I also think that I should be recognized for "most creative use of a paper cutter" for 2007. Box cutters? exacto knife? too time intensive...bring on the paper cutter. So life is good, the floor is down, the dogs were playing. What else? Well, we also want to plug some pretty cool products by a fellow dog lover and business woman. First aid kits for dogs and more. We always think it's good to be prepared, especially if you're away from home. Check out http://www.wagn4u.com! And get Waggin!
Posted by Op Barks No comments: Links to this post A few years back I had a good run with turtles. I'd be cruising around Virginia and see one slowwwly crawling across the road, be it Walter Reed or a winding county road. I'd always stop, pick them up and move them across the road way and hopefully out of harm's way.

Tonight Sweets was on point. She ran to the bottom corner of the pasture, then back to a large rock and stood there. She looked at me, she looked at the corner, back and forth a few times like a tennis match. It wasn't noticeable enough to me at the moment. "I really should move that stump," I thought. So, I picked it up and headed for the corner.

No sooner then I got to the corner did I see a small yellow bellied bird that had one wing tangled in a few "burr" weeds that I had haphazardly tossed in the briars a few days earlier.

Don't get me wrong, I love this stuff. Talk about the trickle down effect- my weeding=injured wildlfe.
So I step up on the stump (perfect step stool don't cha know) and pull the bird out.

I pull out a few of the long burr branches and he falls...

Noses come over to investigate...

I pick him up and can feel his heart pounding. I'm working on picking our the small burrs, ack! there go a few feathers, c'mon let me try to smooth out those feathers and just like that...he chirped and flew off. Meanwhile, Sweets was waiting a the gate, mesmerized, hyptonized by a real, live bird one moment and poof- gone the next.

It's those intense, suprising moments in life that I love. We earned our St. Francis "Yellow Bellied Fly Catcher" Girl Scout Badge at 5:35pm this evening.
Posted by Op Barks No comments: Links to this post

fall fun with the dogs

It's beautiful out there, get out and smell the crisp air, the smell of freshly fallen leaves and everything so undeniably "fall".
Here are our recommendations for things to do this fall.
1. visit a winery, chill in the sun, while fido lies in the grass and chews on your cork or the brie!
2. corn mazes! bring your pal (on leash) and sniff your way to the end
3. pumpkin patches! let your bud sniff our the best and biggest pumpkin
4. leaf piles! drive your inner ocd crazy by jumping in leaf piles!

Enjoy this beautimus time of year and Sweets urges all the humans to play more!
Luv, Sweets
Posted by Op Barks No comments: Links to this post

GET MY QUICK TAKE ON DOG TRAINING QUESTIONS—FOR FREE

Use this PICK MY BRAIN form to ask me anything. I’ve worked with thousands of dogs, am always learning new things, and am happy to share what I know to get you and your dog headed in the right direction. No charge. I also host a monthly webchat on philly.com on the 4th Wednesday of every month from 1–2 p.m. where you can also pick my brain. Browse past web chats here. 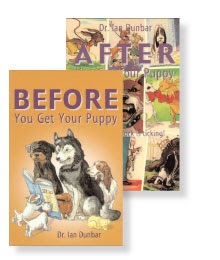 Dr. Dunbar's BEFORE and AFTER you Get your Puppy Books. Courtesy of Sirius Puppy. 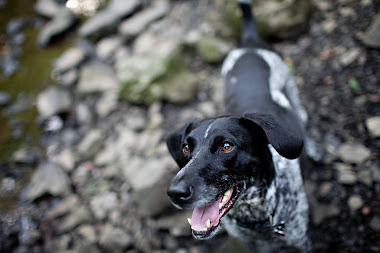 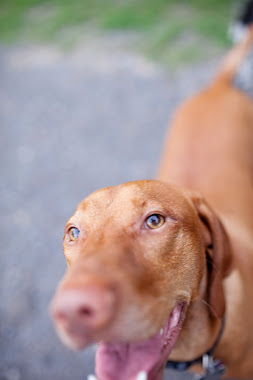 (not so little, little brudder)

Thanks for Lili Chen for making these awesome and educational posters available online. Learn to read "dog" (and stay safe).
• Doggie Language
• How to Greet a Dog
• Dog "Calming Signals"